But Sony Smartwatch is anything but Smart, as it just shows thumbnails processed in your main phone. But on the other side MotoACTV is a complete system with cpu (600Mhz), GPS, Wifi and Bluetooth and you can easily put a different custom rom which will make it just another android device.

This is a review for this product:

This unit does not work with a 2008 Hyundai Santa Fe, Standard radio and manual air conditioning dash purchased in California, USA. The factory units cable harness is not compatible with the harnesses provided. So it is not plug and play. As such never got to try the performance of the unit. Have not contacted the distributer, Koolertron about cable harnesses that will fit this model and year, if they even have one. Unit looks good because you would think it is a factory unit but if you don't want to do a lot of wire splicing this is not the one.
Posted by R.GH. at 8:55 PM

**Jalapeno baste: Seed and coarsely chop 2 jalapeno peppers. Sauté‚ in oil until soft, and add 1 heaping tbs of sugar. Puree. Add a little oil if the mixture seems too thick. Cut chicken into 3/4 inch chunks. Peel and core pineapple and cut into chunks. Combine jalapeno baste with lemon juice and heat through. Thread the shrimp, the chicken, and the pineapple, alternating them, onto the skewers. Brush with the jalapeno mixture, sprinkle with salt and pepper, and grill for 6 - 7 minutes over glowing coals until done. OR broil in the oven. OR cook 10 minutes in the Jet-Stream Oven.
Posted by R.GH. at 8:51 PM

The HTC EVO 3D is almost here!! The expected release date of the device is 24th of June...For new lines, pre-order using this linkFor upgrades, pre-order using this linkOr pay less upfront when you pre-order on Amazon Wireless or Wirefly! The rebate and the account credit do not apply to Amazon and Wirefly orders.Pre-order your EVO 3D on Amazon Wireless - $179.99Pre-order your EVO 3D on Wirefly.com - $179.99
Posted by R.GH. at 7:17 PM

I recently bought a Hyundai 2012 Elantra. It seemed to be a good deal with just 1.9% APR.
If you are a college or graduate student don't forget to bring your transcripts and receive 400$ from Hyundai.
Nothing that much is changed n this model compared to 2011.

So far I liked the economy of fuel consumption and interior designs.

Hyundai is especially proud the EPA says all versions of the Elantra get an estimated 40 miles per gallon on the highway, with either a new six-speed manual gearbox or new six-speed automatic transmission. Estimated city economy for all versions is 29 mpg.
“We don’t charge extra for any Elantra version with a 40-mpg rating,” quipped a Hyundai executive at a media introduction of the car near San Diego, Calif. He was referring to the fact that some rivals with conventional engines only reach that figure with a special “economy” model.
Hyundai has been around a long time here, but some Americans still think the South Korean outfit is a Japanese automaker. The 2011 front-wheel-drive Elantra was designed at the automaker’s North American Design Center in Irvine, Calif., and is built at Hyundai’s Alabama plant.
The nicely built Elantra’s low front end goes with its highly aerodynamic styling, but can be damaged if it hits rather high parking stops at, say, a 7-Eleven. It rides on a 106.3-inch wheelbase, or two inches longer than that of the previous Elantra, and overall length is up by about an inch to 178.3 inches. Width remains the same, but height is lowered by 1.8 inches to 56.5 inches, without affecting headroom.

The new Elantra has scads of interior room, although the center of the rear seat is too firm for anything but short trips. The relatively long wheelbase allows for compact car efficiency with mid-size car comfort.
Indeed, the EPA classifies the new new Elantra as a mid-size car, not a compact auto such as the rival Honda Civic and Toyota Corolla.
The Elantra starts at $14,830 for the base, price-leader GLS Standard model and ends with the $21,980 Premium version. Media at the preview got the $19,980 Limited model, which fits just below the Premium, to drive several hundred miles over a variety of roads.
The new Elantra is pretty well-equipped and even offers optional heated front and rear seats—a segment first. There are no stand-alone options, except for a mini-spare tire. One thus must turn to option packages for extras such as the heated seats, leather upholstery, power sunroof, proximity key with push-button engine start, navigation system, rearview camera, premium audio system and hands-free phone system with voice recognition.
The Elantra has a double-overhead-camshaft, 16-valve 1.8-liter four-cylinder engine. It  kicks out 148 horsepower at a lofty 6,500 rpm and is a light, smooth free-revving unit with nifty features such as dual continuously variable valve timing and a plastic two-stage Variable Intake System that allows switching between long and short intake manifolds—resulting in an across-the-board performance increase.
There’s also electronic throttle control for improved driveablity, response and fuel economy. A maintenance-free (always good news) silent timing chain system enhances durability and helps keep things quiet.
The engine works efficiently with the manual transmission or automatic, which has a manual-shift feature. Most Elantra buyers are expected to get the automatic.
The new Elantra is the first small car in Hyundai’s lineup to get the responsive six-speed automatic, which was in my test car. No manual-transmission-model was available for testing at the preview.
The Elantra is no fireball, but provides good merging into freeway traffic and decent 65-75 mph passing. It has world-class weight efficiency, at 2,661-2,820 pounds with the manual transmission and 2,701-2,877 pounds with the automatic.
There’s widespread use of high-strength steel, and standard safety items include electronic stability control, vehicle stability management with traction control and four-wheel anti-lock disc brakes with brake assist and electronic brake-force distribution for surer panic stops.
The brake pedal initially felt a bit light, but I soon got used to using the pedal to make  smooth, short stops. Of course, the car is loaded with air bags and side curtains.
The electric power steering is quick and adjusts to changing driving conditions while improving fuel economy. It feels somewhat stiff, but allows a tight turning circle. Handling is sharp, with the car staying firmly planted while zipping through tight mountain curves. The ride is on the firm side, but isn’t uncomfortable.
My test car had wide 45-series tires on 17-inch wheels, which doubtlessly helped handling. Available are 15-, 16- and 17-inch wheels. The wider the wheels and tires, the better the handling.
The interior is attractive, although there’s a fair amount of hard plastic in the dashboard area. Backlit gauges don’t get washed out by bright sunlight, as they do on many cars, and controls are fairly easy to use. Front seats are supportive, and there are plenty of decent-sized cabin  storage areas. The rear fold-down center armrest, however, looks cheap and sits at an angle when flipped forward.
The roomy trunk has a low, wide opening, and split rear seatbacks with trunk releases for security’s sake fold flat to enlarge the cargo area.
Posted by R.GH. at 7:13 PM

Combine the first five ingredients, mixing well; spread on both sides of chicken. Place chicken on a plate. Marinate at room temperature for 15 minutes or for several hours in the refrigerator. Grill, uncovered, over medium coals, turning once, for 10 to 15 minutes or until juices run clear.

In medium bowl, combine ground beef, onion and 2 tablespoons barbecue sauce, mixing thoroughly. Shape into four 1/2-inch-thick patties. Place patties on grid over medium ash-covered coals. Grill 14 to 16 minutes or until centers are no longer pink, turning once. Approximately 1 minute before end of cooking time, brush top side of burgers with additional barbecue sauce; top each with 1 slice cheese. Cook until cheese slices are melted. Line bottom half of each roll with lettuce and tomato; top with cheeseburger. Close sandwiches.

It's all bout Grills 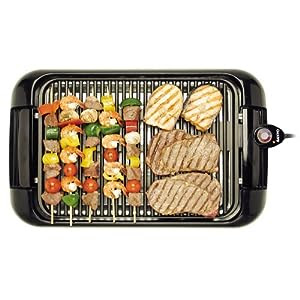 My Review:
Great deal. Go for it while its still left.
Reviews:
This is one appliance that lives up to every one of the manufacturer's claims. I follow directions and spray the grill surface with cooking spray and put half a cup of water in the pan below, and the grill really is, as advertised, smokeless and extremely easy to clean. I like the adjustable grill temperature, a feature I'm not used to since my faithful antique Farberware, now deceased, had only two settings, namely "plugged in and on" or "unplugged and off". The Sanyo cooks everying in half the time the old grill did, and without cabinet-endangering flareups. I particularly like the enormous cooking surface since I'm regularly cooking for 5 adults and a child and with this grill I can cook for all of us at once. The dimensions make it easy to store if you set it vertically rather than horizontally. The appliance is so low in height that I set mine on a silicone countertop protector, but I'm not sure this is really necessary. My only complaint is that there is no surrounding rim to keep your hamburgers from sliding right off the grill when you try to flip them over, but using a second spatula as a backstop solves that problem. This grill is a terrific bargain even at the suggested retail price; at the current Amazon price it's even more terrific.
I read the review about how long it takes to preheat this grill, well being a full time chef (aa culinary arts) and over 20 years in the industry, I have used many different types of grills, and in most cases when I needed it to heat up quickly we would just place a sheet pan over it and it decreased the startup time significantly. Well I found a aluminum baking pan which fit this grill perfectly, the metal does not come in contact with the plastic base, and it took only 4 minutes to reach the high setting. I used a litte non stick spray and placed 2, 1 inch thick lamb chops on it and it seared them perfectly and quickly, placed the cover (pan) back over them, waited about 3 minutes, turned them over, and grilled another 2 minutes and they were well done. Totoal time grill was on 10 minutes. Now lamb is about the greasiest meat and I did get a little smoke, but that was only when the searing was taking place, and with the cover very little splatter also. I think if they could the would make a cover for this unit, but it would probably not pass U.L. standards? Not sure but if you are using this grill as with other appliances you must keep a close eye on them. I got this item next day with amazon prime total was only 34 bucks. Great deal and product.
Posted by R.GH. at 8:03 PM